Wildfires out West: ‘God Was Watching Over Us’

Posted on August 27, 2015 by chogministries | Comments Off on Wildfires out West: ‘God Was Watching Over Us’ 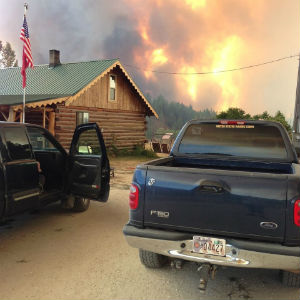 Wildfires have scorched more than 600,000 acres in Washington State alone this year. Massive infernos rage on in seventeen states, mostly out West, including the particularly hard-hit states of Washington, Oregon, Idaho, and California. Fueled by prolonged drought, these fires have forced the evacuations of thousands, destroyed hundreds of homes, and claimed the lives of three firefighters. For the first time in the state’s history, Washington has had to ask for the help of volunteers as they battle blazes beyond their control. Local churches have stepped up to help by offering space for evacuees, collecting supplies for firefighters, and rallying believers to unite in prayer. Many have witnessed firsthand the power and destructive force of these fires, as well as the opportunities for being the hands and feet of Christ. END_OF_DOCUMENT_TOKEN_TO_BE_REPLACED

Comments Off on Wildfires out West: ‘God Was Watching Over Us’

Posted in All Church of God, Western