NIYC 2019: Year Ends with Preaching, Prayer, and Praise in Pittsburgh

Posted on January 14, 2020 by chogministries | Comments Off on NIYC 2019: Year Ends with Preaching, Prayer, and Praise in Pittsburgh

Every year, while others are recovering from Christmas and preparing for New Year’s Eve, teens and adults from across the Church of God meet up for one of the most important events in the life of the movement. December 27–31 may seem like an unusual time* for a church convention, but those who make the effort to travel to the host city of the National Inspirational Youth Convention (NIYC) of the Church of God for the last few days of the year are never disappointed. NIYC 2019 was no different; souls were refreshed, leaders were developed, and lives were forever changed. The ball may have dropped for a tightly packed crowd of partiers in Times Square, but the year ended with preaching, prayer, and praise in Pittsburgh, Pennsylvania. END_OF_DOCUMENT_TOKEN_TO_BE_REPLACED

Comments Off on NIYC 2019: Year Ends with Preaching, Prayer, and Praise in Pittsburgh

Posted on June 5, 2019 by chogministries | Comments Off on South Dakota Church: Farmers, You’re Not Alone

Very few fields looks this good (at least this one’s been planted!).

This has not been a good year for farmers. Actually, agricultural conditions have taken an economic and emotional toll on farmers for the past year-and-a-half, though much of the country is only beginning to take notice. While American routine often involves that indispensable weekly trip to the supermarket, requiring little to no thought of the origins of their convenient purchases, farmers bear the brunt of the material and mental cost. A May 29 article published in FarmWorld reported that the USDA’s assessments showed corn planting across the country was at its “slowest pace” since 1980. It’s no wonder, considering much of the country—from the Rocky Mountains to the Midwest and through the South—has been locked in a seemingly never-ending cycle of rain. With uncertain days upon farmers, as well as everyone connected to the agricultural industry, First Church of God in Marion, South Dakota, addressed the need early this month in the best way they knew how—prayer. END_OF_DOCUMENT_TOKEN_TO_BE_REPLACED

Comments Off on South Dakota Church: Farmers, You’re Not Alone

Three Worlds Leadership Network 3.0 a Blessing to All

Posted on January 2, 2019 by chogministries | Comments Off on Three Worlds Leadership Network 3.0 a Blessing to All 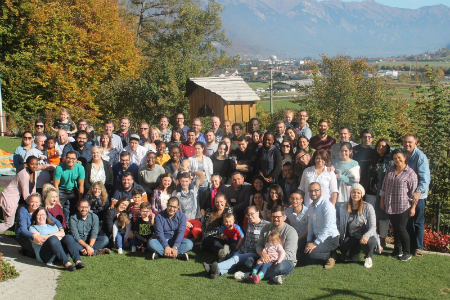 It’s hard to believe, but we have just completed our third Three Worlds Leadership Network (3WLN) conference! It has been amazing to watch how quickly this support network for church leaders between the ages of 18 and 45 has grown in just a couple of years. For this year’s event, we had 85 delegates from 16 countries, representing 29 different nationalities. It was wonderful to see all of these sharp, promising young leaders continuing to connect, dreaming up new dreams and visions, and supporting one another. END_OF_DOCUMENT_TOKEN_TO_BE_REPLACED

Comments Off on Three Worlds Leadership Network 3.0 a Blessing to All

“That They May Be One” in Southern Africa

Posted on September 14, 2018 by chogministries | Comments Off on “That They May Be One” in Southern Africa

By Mike and Heather Webb with Corey and Abby Stocksdale

Over sixty individuals from six different southern Africa countries gathered in Botswana the first week of August 2018. They traveled by bus and plane to meet together for the second Southern Africa Church of God Conference. This is a conference that was dreamed up, planned, and implemented by the national leaders in southern Africa. END_OF_DOCUMENT_TOKEN_TO_BE_REPLACED

Comments Off on “That They May Be One” in Southern Africa

Posted on August 29, 2018 by chogministries | Comments Off on Unity in the Caribbean: Convention Helps Re-establish Regional Assembly

We love to talk about unity in the Church of God, but putting it into practice is often another story. Over the past two years, the national churches of the Caribbean-Atlantic region have taken steps to move beyond theoretical to functional unity once again. Though an assembly of national churches came together formally in the 1970s, recent years had seen a downturn in participation and interest. Until 2018, more than seven years had passed without a convention of the Caribbean-Atlantic Assembly. From July 28 through August 3, seven of fourteen national churches united in a visible recommitment to worshiping and working together for the advancement of the kingdom in their region. END_OF_DOCUMENT_TOKEN_TO_BE_REPLACED

Comments Off on Unity in the Caribbean: Convention Helps Re-establish Regional Assembly

Posted in All Church of God, Give Life, Global Strategy 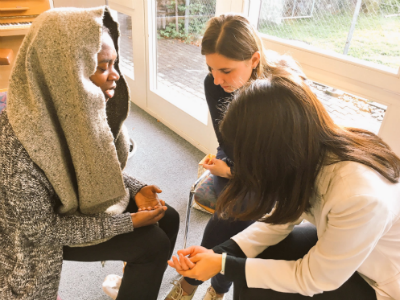 Photo: Multinational prayer at the gathering.

Across much of Europe and the Middle East, evangelical Christians compose only 0.25 to 4 percent of the population. While young Christians in North American have been given the opportunity to experience worship and fellowship with thousands of other believers—such as IYC—many Christians across European and Middle Eastern countries have never been in the same room with more than a dozen young adults who share their faith. The presence, support, and comradery of other believers is often a breath of fresh air among those for whom isolation is the norm. The second gathering of the Three Worlds Leadership Network commenced in beautiful Switzerland in early May this year, bringing with it that much-needed breath of fresh air. END_OF_DOCUMENT_TOKEN_TO_BE_REPLACED

Posted on September 7, 2016 by chogministries | Comments Off on IYC, NIYC and Concilio Hispano Youth to Hold Unity Event in 2017 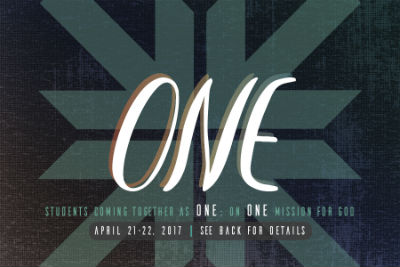 Two of our partners in ministry celebrate vibrant youth ministry outside of involvement in the International Youth Convention, including the National Association’s NIYC (National Inspirational Youth Convention) and the student ministries of the Hispanic Council (Concilio Hispano). For many youth in the Church of God, IYC is not the pinnacle of their year; NIYC or the youth events of the Hispanic Council take that description. It is with great anticipation then, that in 2017, students of IYC, NIYC, and the Hispanic Council will come together for a groundbreaking unity event. ONE will gather youth across ethnic and cultural lines together under the banner of Christ to worship and serve together. When unity becomes more than just talk, incredible things begin to happen. END_OF_DOCUMENT_TOKEN_TO_BE_REPLACED

Comments Off on IYC, NIYC and Concilio Hispano Youth to Hold Unity Event in 2017

Posted on April 29, 2016 by chogministries | Comments Off on Reclaim 2016 Energizes Movement as First Regional Wraps Up

“If we’re going to reclaim the neighborhood, we have to stop keeping people at a safe distance, and let them in.” Steve Arterburn’s profound, yet simple words seemed to echo in the expanse of Vancouver Church in Vancouver, Washington, during the last week of April 2016. It was the first of three Regional Conventions challenging the Church of God to reclaim our neighbors—and our neighborhoods—for Jesus Christ. Inspired by the Holy Spirit, Steve’s message wasn’t the only one cutting to the core of who we are as a movement. Milton Grannum, Ben Hardman, Arnetta McNeese Bailey, and Reggie McNeal also delivered God’s Word with conviction and clarity to the several hundred Church of God people gathered from up and down the West Coast and beyond. Social media lit up during the event, offering those waiting for the Anderson or Philadelphia conventions a foretaste of the movement-energizing experience. END_OF_DOCUMENT_TOKEN_TO_BE_REPLACED

Posted on October 16, 2015 by chogministries | Comments Off on Church of God Convention: Locations, Dates Announced for 2016, 2017 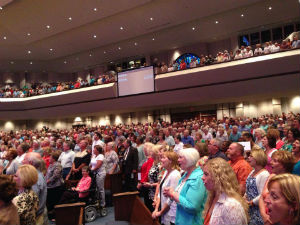 You’ve been waiting and wondering. Now you don’t have to wait any longer! We’ve learned the locations and dates for the 2016 regional conventions and Church of God Convention 2017. After two years of historic gatherings in Oklahoma City, and following a historic decision in June 2015, the Church of God Convention begins a new chapter featuring multiple locations across the country. You’ll want to mark your calendars and save these important dates!

Your Ministries Council and your team at Church of God Ministries urge you to attend one of the 2016 regional conventions, which will also feature the CHOG Table—a setting where we will grapple with important issues facing the church in our generation. These inspirational gatherings will feed your soul and connect you with friends and ministry colleagues. You won’t want to miss being a part of these meaningful events. See the announcement from Jim Lyon and the Ministries Council.

Comments Off on Church of God Convention: Locations, Dates Announced for 2016, 2017