Posted on January 28, 2020 by chogministries | Comments Off on Anticipation Builds for the E2020 Women Clergy Conference 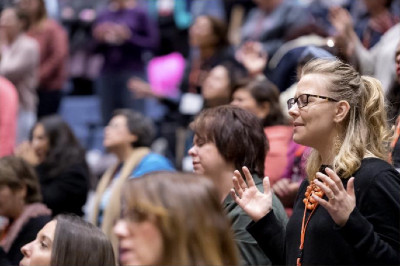 By Carron Odokara and Carl Stagner

Women in ministry have a strong heritage in the Wesleyan-holiness tradition. History continues to be made as women in ministry from a wide variety of denominational backgrounds come together in unity under the banner of Jesus Christ. The Wesleyan Holiness Women Clergy are excited to present E2020, a premier conference approaching fast with great anticipation. March 12–15 will be here before you know it, so those going from the Church of God urge you to make plans soon for an unforgettable experience of anointed preaching, Spirit-filled prayer and worship, and powerful workshops for refreshment and renewal. END_OF_DOCUMENT_TOKEN_TO_BE_REPLACED

Comments Off on Anticipation Builds for the E2020 Women Clergy Conference

Posted on June 23, 2017 by chogministries | Comments Off on Convention 2017: Women Lead the Way on Thursday

Just in case anyone had forgotten, Thursday at Church of God Convention 2017 was a reminder to everyone that an anointed woman of God cannot be discounted. On June 22, the Church of God Convention featured not one, not two, but three different women leaders who have had an extensive impact on the church and culture around us. Ann Smith, Anita Renfroe, and Danielle Strickland offered messages oozing with wisdom, wit, and, in Anita Renfroe’s case, sheer hilarity, too. It was the women—not the men—who led the way on Thursday. END_OF_DOCUMENT_TOKEN_TO_BE_REPLACED

Comments Off on Convention 2017: Women Lead the Way on Thursday