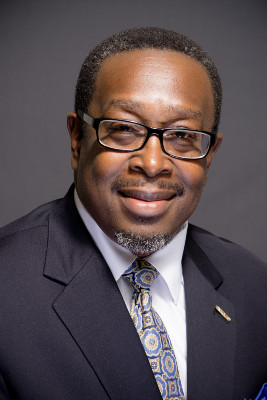 The Church of God has a rich history of raising up outstanding musical talent. From Doug Oldham to Edward Cumberbatch, from Sandi Patty to Alanna Story and numerous others, musicians in the Church of God have faithfully expressed their joy in the Lord through song. No list of our Movement’s stellar musicians could be complete without the name of Chuck Myricks. The son of the highly-acclaimed Cleo Myricks needs little introduction as he has clearly established a name for himself in the music industry, in both Christian and secular business circles, and across the Church of God and beyond. Of course, Chuck’s mission isn’t to make a name for himself but to lift up the name of Jesus. In so doing, he already wears several ministry hats and won’t be removing any of them any time soon. Now he’s excited to announce he’s donning one more—as he joins the staff, part-time, of Servant Solutions.

In no way does this additional role as a regional representative for Servant Solutions diminish Chuck’s primary position with the National Association. In many ways, in fact, it equips him with more resources to serve the movement he loves dearly. In 2007, Chuck Myricks Jr. became the first chief operating and development officer of the National Association of the Church of God (with headquarters in West Middlesex, Pennsylvania). As CODO for NACOG, he watches over its day-to-day operations, including how churches connect and stay in-the-know with what God is doing among them. The events, programming, and property—including Camp Meeting and NIYC, as well as events for men, women, ushers, and much more—fall under his responsibility. Groomed by God for the job, Chuck Myricks uses the business acumen he picked up from years of success in the business world to further the kingdom of God around the world. 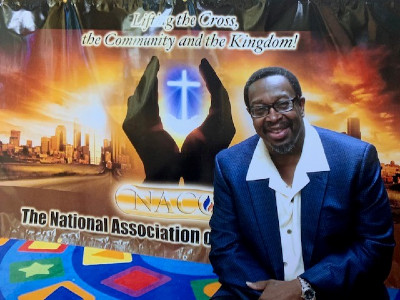 Chuck’s primary role is with the National Association (NACOG).

At some point, it all comes back to music for Chuck, which he calls his avocation. A couple years ago Chuck was granted a prestigious award in downtown Chicago for an original arrangement of spirituals, titled “There’s a Stirring in the Water.” Though he doesn’t tickle the ivories or vocalize as much as he used to, even today he’s chipping away at a project for which great anticipation is entirely appropriate. Many in the Church of God remember the powerfully moving musical Chuck wrote, and performed in, depicting the life and ministry of the apostle Paul. But lately when he has a moment of inspiration, he’s jotting down lines for a musical about the “man after God’s own heart”—indeed, David, himself.

Chuck Myricks grew up at Arlington Church of God in Akron, Ohio, under the outstanding leadership of Ron Fowler. His experience in a musical family invested in service to the local church molded Chuck into the man he would soon become. “When I gave my heart to the Lord,” Chuck recounts, “that same day I asked him to give me the gift of music so I could serve the body of Christ through music. Pastor Fowler, Rev. Horace Sheppard, my mother, and our church secretary Tiajuana Robinson anointed my hands and prayed for me. I can still see that as clear as day. I was sixteen years old.”

Chuck with his wife Sheri at a production of Paul: A Musical Journey.

Vocational ministry wasn’t an aspiration for Chuck, though he understood from the beginning that to be Christian was to be a servant of his King. Music was Chuck’s first major vehicle for Christian service. At a young age, he became one of the national music directors for the National Association, and even extended his leadership abilities to include the office of treasurer for their youth ministry. He traveled across the country and beyond with a gospel group called Divine Hope, which utilized a blend of original, contemporary, and jazz stylings to communicate the message of Christ. The graduate of Anderson University went on to become one of the first African Americans to be vice president and general manager for one of the top five Christian music labels. Under his leadership, Word Gospel’s recordings garnered several Grammy, Dove, and Stellar Awards. Chuck Myricks was also instrumental in distributing the first multi-platinum gospel recording in the modern era of gospel music.

“I think the Lord uses his gifts almost like breadcrumbs to bring us into his joy,” Chuck reflects. “So, all along my pathway, that experience has given me direction and has opened doors to expand my ability to be of value to the kingdom of God. It’s been more than a joy; it’s been a homing beacon that the Lord has continued to use.”

Over the years, Chuck describes God’s work in his heart as a whisper, perhaps even a “dawning conversation.” He always understood what he was doing was ministry. It didn’t matter that he didn’t carry official credentials; the divine call was upon his life. But over time, Chuck became more and more convinced that the Lord was preparing him for something different. “The Lord had matured me in the secular business world as he gave me success in a number of different settings as it relates to organizational life, event planning and execution, managing people, and handling sales. Additionally, I was convinced that the extra perspective I had gained in the church nationally and cross-denominationally through the music business could be used in full-time ministry.”

Chuck with his mother, Cleo Myricks.

It would be a significant and uncomfortable shift for Chuck, but he remembers the Lord’s impression on his heart: “What are you going to do? Are you going to cry about it, or are you going to get to work?” Chuck says, “So, I accepted the call to make it a full-time pursuit. I left the music business and went to seminary.”

As the need arose at the National Association for someone with a ministry and business background, God orchestrated all the parts to come together in beautiful harmony, and the rest is history. Even today, as he reflects on those who poured into his life and ministry, including his mother Cleo, he points not to the musical talent, but to the character and leadership modeled so well.

“The turtle did not get to the top of the fence post on his own,” Chuck concludes. “My journey has been blessed by so many marvelous servants of our Lord Jesus. I am grateful beyond words, and my task is to be a good steward of the gifts and opportunity the Lord has given me to glorify his name, expand his kingdom, and serve his people.”

Chuck is married to Sherilyn Beverly Myricks. They have three children: Kathryn Elizabeth, Kristen Nichelle, and Charles James III. They have one grandchild, Julian Rosa.