Restored and Resolute: Pastor’s Painful Past Redeemed for Purpose, Promise

Posted on December 4, 2019 by chogministries | Comments Off on Restored and Resolute: Pastor’s Painful Past Redeemed for Purpose, Promise

Ray Hodges had personal experience with church; he’d never had personal experience with the risen Christ. Growing up Catholic, he’d acknowledged the existence of God but would confess there was no relationship with Jesus. Even when he began attending the Iglesia de Dios (Church of God) with his girlfriend, it was the kindness of the people, the lively music, and the relatable preaching that he came to know and love. Without the foundation of Christ in his life, the allure of drugs and parties soon became too much to bear. Thankfully, the patience and persistent prayers of his wife and pastor over Ray’s fifteen-year addiction paid off when Jesus Christ gloriously redeemed his painful past for a future of purpose and promise.

The year was 1987. Ray Hodges wasn’t a follower of Christ, but felt very open to the faith and very welcome in the Church of God they attended in Corpus Christi, Texas, pastored by Gilbert Davila and later Bill Banda. At age nineteen, he and his girlfriend Michelle learned they would be parents. The two got married, but that didn’t solve their problems. Sure, Ray already had a job as a barber and could keep the family afloat, but it wasn’t long before he was introduced to drugs and a lifestyle of partying.

“Initially, it was recreational,” Ray reflects. “What’s fascinating is that we continued to be churchgoers. We loved the church family and we felt welcome. Going to church as Americans was just something we did; it was part of our routine. Fast-forward to about 1995, though, and I was completely addicted to drugs. So, I was then a business owner, a husband, a father, and a churchgoer, trying desperately to balance it all.” 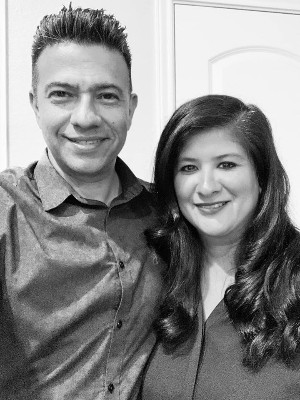 Of course, no one can balance a life like that forever. Still, Ray tried. Perhaps the limited success he saw for awhile spurred him to continue trying. Wanting to avoid getting his family caught up in the mess of his own making, his compartmentalized drug use outside the home put Ray, as he describes, on the “fast track” to addiction.

Meanwhile, Michelle didn’t know what to do. She reached out to family members. She contacted Pastor Bill. She was searching for help while petitioning God for answers. Ray was at least a little embarrassed, but not enough to stop. After all, the family continued to go to church almost every time the doors were open. Pastor Bill even allowed Ray to serve the church as a greeter. Little did Pastor Bill know that this generous inclusion would end up being one example of resolute love and patience that Ray points to as being vital to his ultimate restoration.

“Pastor Bill was so patient, so Christlike,” Ray recalls. “He patiently discipled me, not for one year, not for two years, but for fifteen years, knowing the struggle I was facing and not giving up on me. Over the course of three severe drug overdoses, Pastor Bill was there. He was at the hospital. He never gave up on me.”

There were times Ray was spending so much money on drugs he couldn’t feed his family. The church’s witness was steady, though, as they provided his family with groceries. Ray remembers admiring the men of God in the congregation, in particular, who would serve humbly, generously giving of their time and energy to ministry. He saw the peace and joy in their hearts reflected in their smiles. He wanted that. But Ray was stuck. Until…

“The year 2005…God took me to a place where it was as if he said, ‘You’ve seen enough, done enough, had enough,” Ray remembers. “God showed me mercy. He obviously wasn’t approving of the things I was doing, but he kept me all those years from feeling the full weight of what I was doing—for example, I never served jail time. And I was shot at. I think about all the times I came close to death. The Lord spared me. By this time, Michelle’s family had told her to leave me, insisting that I’d never change. In August of that year, I was left with nothing. I called out to God and began confessing my sins and even asked God to remind me of the things I hadn’t asked forgiveness for. Like a tube of toothpaste, God was squeezing out the last of me. It was an undeniable envelopment of love, and I knew I had just met the risen Christ.” Ray’s stash of drugs went down the drain that day, along with the sting of his painful past.

A moment like that simply had to be shared. Ray was excited! But he had cried wolf so many times that surely no one would believe him. Michelle was still living at home with Ray, but only for economic benefit. She needed to see that things were different this time. Three months later, still sober and still exhibiting Christ, she rose to give a testimony in church and declared the miracle she saw in her husband. “It was something I didn’t have to do,” Ray explains. “She just stood up one day and began to tell people how the Lord had changed me. And that it was real. And that I’d never been the same since.”

Ray performing a baptism on November 24.

In the months following, Ray grew as a disciple. He noticed a sudden ability to recall the Scriptures of his childhood and young adult years, and then teach it. He used his barber shop as a tool for witnessing. Over the years, Pastor Bill gave him more and more responsibility in the church. Ray ultimately served as associate pastor there, went on to plant another local church, and served a short season at the Crosspointe-Longview, Texas, campus. “One of the things I told God when he saved me was that if he would take the addiction from me, whether I had a day, a week, or years to live, I would spend the rest of my life telling people about Jesus,” Ray reflects.

On September 22, Ray and Michelle Hodges rejoiced over the launch of Resolute Church, the newest Church of God plant in Corpus Christi. For a year, they’d been ramping up to that eventful day, when so much of the work they’d accomplished would begin to bear fruit. In just eight weeks, thirty-five people made professions of faith in Jesus Christ. On November 24, some of these went public with their faith through baptism.

As for the name Resolute, Ray points to this vital attribute displayed by his pastor all through his fifteen-year living nightmare of addiction. Now he wants those under his leadership to be resolute, too, and “love without stopping,” emphasizing the Apostle Paul’s admonition in 1 Corinthians 16:13. His prayer is that God would continue to provide the necessary resources for the church plant, as well as the wisdom to lead in the way of Jesus.

In Texas, across North America, and around the world, the Church of God is taking back what hell has stolen. Join the movement. Give life. Donate today at www.jesusisthesubject.org/give.