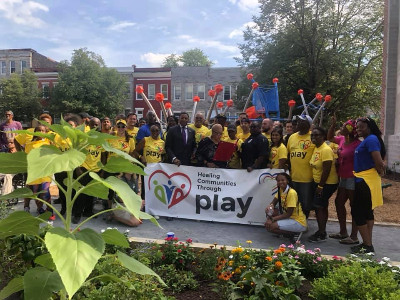 Volunteers from across the community made Kirby Lane Park possible!

The goal was pretty ambitious: build a park for the community in just eight hours. Of course, this wasn’t about timing, but it was a rallying call to the community to work together to achieve something they could only accomplish together. Negative news coverage of their city over the last year wasn’t going to stop them from showing their community and places far beyond who they really are. So, late this summer, Celebration Church Monroe Street in Baltimore, Maryland, came alongside government agencies, community organizations, and neighbors, channeling resources and efforts to remove blight and restore beauty. The construction and completion of the all-new Kirby Lane Park was yet another step Celebration Church Monroe Street has taken to boldly reclaim their neighborhood in Jesus’ name.

The conversation began a few years ago when Celebration Church Monroe Street was participating in the mayor’s citywide cleanup day. The amount of trash collected revealed a problem far worse than littering; illegal dumping activity from outside the community had grown to disturbing proportions. The initial response of a fence proved only the first step in the road to correcting the problem. More discussion led to the demolishing of three dilapidated houses, but even that didn’t speak volumes to the public that this neighborhood meant business. Celebration Church Monroe Street knew something had to be done to not only take away the mess, but leave behind a masterpiece.

Donald Quarles attends the church and was compelled to help make something happen. He and Pastor Bob Washington recall that “the specific vision to have a playground was shared as a potentially creative way to beautify the community and offer them a much-needed playground.” Pastor Bob had often shared his vision of seeing a park in the community and, with progress on the street beautification front, it began to look like this vision would come to pass. In partnership with the local community association; Ben Secours Community Works; Southwest Partnership; Bmore Beautiful; the project core of the State of Maryland; Cunningham Rec., Parks, and People; Frederick Christian Fellowship Church; GameTime; Play4All; the city police department; and Fayette Outreach/Penrose Community, the necessary funds were raised, the site was developed, and playground equipment was acquired. Instead of paying someone to do the labor, sixty volunteers showed up with a heart for their community and hands ready to work.

“It took eight hours to build the playground,” Donald and Pastor Bob explain, “and it was exciting to have so many people from various parts of the city, state, and country come to the community here in West Baltimore, just half a block from the church, to help build this playground.”

Donald Quarles interviewed by local TV station about the project.

Kirby Lane Park includes playground equipment, a horseshoe pit, five park benches, a serenity garden, a cookout area, flower beds, and fencing. “We continue to be blessed,” they explain, “as we now see the kids playing on the playground equipment, as well as the adults playing horseshoes, having fun and laughing with each other. Knowing how much joy it brings to this community is a blessing and prayerfully brings great joy to our Lord and rejoicing in heaven.”

Kirby Lane Park isn’t the exception to the rule. Celebration Church Monroe Street is a consistent advocate for their neighbors and champion of their city. Community health fairs, summer festivals, clothing distribution, prayer tents, and more have all been outflows of the church’s natural bent to give life. Pastor Bob reflects, “We have always wanted to have a witness in the community. We want people to see the love of Christ and power of the gospel, and ultimately be drawn to Jesus. We want the community to know there is a people that loves them. We want to ‘help people win in life’ (Romans 5:17), which is our vision, and we want to build up a “City of Champions” who experience the abundant life here on earth and eternal life in heaven that Jesus promises. We do not want to come on Sundays and just take up parking spaces. It is our prayer that the Lord will take the seeds that we plant and draw people to himself.”

In Maryland, across North America, and around the world, the Church of God is taking back what hell has stolen. Join the movement. Give life. Donate today at www.jesusisthesubject.org/give.