Posted on April 15, 2019 by chogministries | Comments Off on Messy but Miraculous: Missouri Churches Merge to Maximize Kingdom Impact

Johnny Phifer was serving as the pastor of Walnut Lawn Church of God in Springfield, Missouri. Rick Herald was the pastor of LifeQuest Church, also in Springfield. Neither church was on life support or even in serious trouble. Still, each church did have its fair share of challenges; in particular, the average age of the Walnut Lawn congregation was progressively older, while LifeQuest faced a sizeable debt. But, while it’s true that the notion of a merger seemed to address these basic needs, these were not the primary motivators for a decision of such far-reaching implications. There had to be more. And there was.

Rick explains. “Neither church was in panic mode. However, both churches did have challenges, as all congregations do, yet there seemed to be a possibility that if we took the strengths of each congregation, and merged them together, we could become one new church and be better together than separate.”

Johnny agrees. For him, the vision came a few years before the idea of merging looked like the direction God was leading. He began to wonder what it would look like for an existing church to begin anew and how that might affect the church’s trajectory toward future health and growth. “As I continued to pastor Walnut Lawn,” he recalls, “I eventually began to wonder if it could ever be possible for Walnut Lawn and LifeQuest to come together as one ministry. Though I wondered, I never mentioned it to anyone except my wife.”

A move of dramatic proportions like this one would necessitate much change. There would be growing pains, and it would be anything but easy. As Johnny and Rick began to discuss the possibilities, they acknowledged the hurdles they would face, though they never suspected just how hard it would be. Later they reflected how important it was that they couldn’t have imagined the scope of the challenges, realizing such a glimpse could have kept them from moving forward.

“Fairly early in our discussions,” Johnny continues, “the combined leadership teams realized that, for a new church to be a reality, it would have to be something more than just one church joining the other. We really did need to establish new DNA. This could never happen if one group simply began to gather with the other—essentially worshiping as ‘outsiders’ coming in to the other church’s facility and under their name. We really believed that beginning new meant just that—a new name, a new location, new bylaws, a new vision, etc.”

But that’s change, and the tendency is for people to resist change, especially when routines offer comfort. Too often, Rick says, it takes a tragedy to bring about change that was needed in the first place. “In this instance,” he reflects, “we were proactive instead of reactive. As to the importance of a new location and new everything, I like to use the illustration of a couple getting married, perhaps later in life. Perhaps one or both had been married before and had become widowed, etc., and both own their own home, have their own yard, furniture, routine, etc. If one sells and moves into the other’s house, it can often feel like a move-in versus a shared experience of purchasing a new home, having one new yard, etc., together, as a new couple. We felt this was important for both churches to say they’ll become one, and to become one, those were some critical things that needed to be new.” 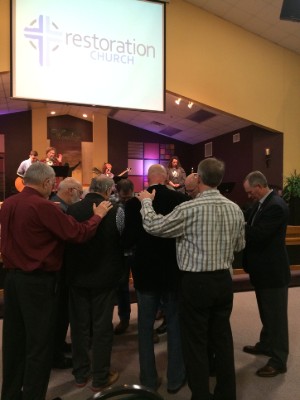 Commissioning the new board of elders.

Though the vote to merge was overwhelmingly positive, not everyone stuck around. The new church saw some loss from both previous congregations. A shift in metrics—measuring what matters—encourages Rick and Johnny. Making disciples, not filling the seats, is what matters most to Restoration Church. So, while the loss of some was painful, the church is remaining obedient to what God called them to do. Co-pastoring, then, became a learning curve for both former solo lead pastors.

Johnny paints the picture of what it might be like to have two heads. “It can, at times, be challenging when it comes to making decisions and knowing who is overseeing what,” he explains. “But, from the beginning, I have personally attempted (sometimes, perhaps, to a fault) to make strong attempts to be sure we are both involved in discussions and decisions that relate to the overall ministry of the church…I believe we are both still learning and adjusting to this unorthodox leadership model, but we continue to embrace the fact that God has asked us to lead in this way.”

Rick says co-leading forces you to “check your ego at the door,” citing Philippians 2:1–8. Thus, it’s really a good thing. “Actually, when you read the New Testament, the model seems to be team ministry. Jesus sent the Twelve out in twos; in Acts, we see Paul and Barnabas, and Paul and Silas. Others in ministry did the same. We are still in the process of working out defined roles of responsibility, but the goal is that, instead of having to oversee multiple areas of ministry, we can instead focus on gifts and passions.”

Much detail work goes into a merger; it’s not all celebration and it’s not all glamorous missional activity. Administrative matters cannot be overlooked. Bank accounts, property sales, bylaws, budgets, and much more go into something of this magnitude. But the payoff is incredible, and the church rejoices in the progress that God been made. One of those rewards is their new facility, a former conference and event center. The new venue has allowed room for the rental of office space, which foster community relationships and provides additional revenue. There’s even a Korean church that meets on the property. 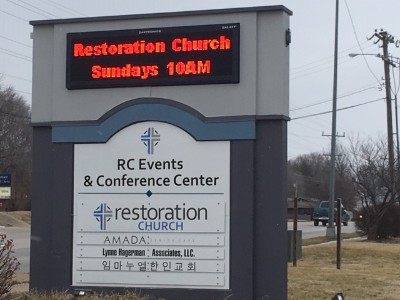 Jesus is the subject for Restoration Church—not the past, not the building, and not the ways they always did things. Johnny and Rick agree their story is a reflection of “Jesus is the subject.” Johnny reflects, “Both congregations had to give up personal desires, identities and, ultimately, congregational names, monies, and more—all for the purpose of attempting to let God do his greater work through one body of believers, rather than two.”

Rick adds, “It speaks well to the call of unity. Too often you hear of church splits, conflicts, and divisions. Many individuals have been part of such events and have scars because of it all. This is something that is not as common. Two churches willing to put it all on the line, surrender property, ministries, bylaws, and names. Who does that?! I believe it definitely speaks to ‘Jesus is the subject’ in the sense that our goal, vision, and purpose is not about a location, name, or even a pastor, but rather in pursuing the call Jesus gave to go and make disciples. Our name Restoration speaks to our vision of helping people discover God’s design for life.”

This messy but miraculous story unfolding in Springfield, Missouri, is only beginning to be written. Already it’s been a learning experience for both Johnny and Rick, and one they wouldn’t trade for the world. Rick describes the sentiment well: “God works in his way and in his time. I have always said that and believed it, but have been forced to live it. Now, more than ever, I can say it is good to wait. Not easy, but very good indeed.”