Called to Connect the Inner-City to Christ in Connecticut

Posted on February 19, 2019 by chogministries | Comments Off on Called to Connect the Inner-City to Christ in Connecticut 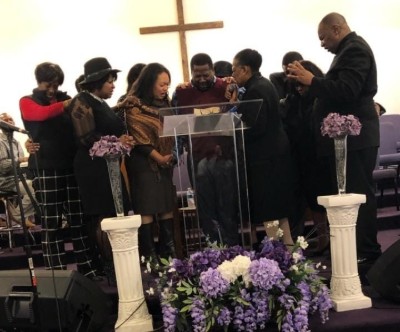 Special moment of prayer at New Antioch Church of God.

New Haven, Connecticut, is home to Esau Greene. He grew up in a family well-known to the community, achieving success in school, excelling especially in sports. After college, his story took a turn for the worse. But before it was too late, Jesus Christ not only rescued him from a life of drugs but also called him into ministry. Knowing what it’s like to live on the streets yet highly educated with a degree in human services, and coming from a family of influence yet familiar with the allure of drugs, Esau Greene is God’s man for the job—urban pastor in a college city. Though the church he leads is only three-and-a-half years old, it’s already grown from 5 to some 130 people.

There are a whopping thirty-five colleges and universities within a forty-mile radius of downtown New Haven. Three of the most recognizable are Yale, Quinnipiac, and the University of New Haven. The dichotomy is stark; the upper echelons of society converge with some of the worst economic and spiritual conditions, all in the same community. One of the latest initiatives of Pastor Esau’s congregation, New Antioch Church of God, is the development of a team with a heart and vision to speak life onto the campuses of higher education. In the meantime, the church’s urban ministry has really begun to make waves. 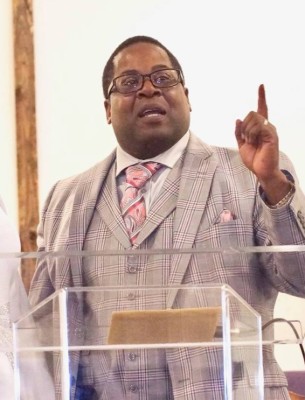 “Our outreach has primarily been street ministry,” Esau explains. “We have a number of individuals who are formerly addicts and prostitutes, including a number of women who have gone through abuse. I’m a throwback, very nostalgic individual; in the African American church years ago, they were conduits to the community to go and further their education. We’re looking to really embrace individuals, and that doesn’t necessarily mean that you have to proselytize twenty-four hours a day. It means you become friends with people. Let them know that the church is a place that provides for them and is not constantly preaching to you. I believe that you win people through many different facets of love, and one is to show individuals they have potential, that they, too, have the intellect to bring themselves out of a low socioeconomic status.”

That’s one of the strategies of New Antioch Church of God, and it puts spring in Pastor Esau’s step. As part of the church’s Black History Month celebration, they’re sponsoring a college fair. “Many young people of minorities do not attend college,” Esau explains. “This is another avenue to give them some hope that the streets aren’t the only place for them and there are other ways to grow in life. We’re creating a mindset where Christ is welcome in your life not just as your Master, but also as a friend. The prevailing mindset is that a lot of inner-city youth in the church today will, at some point, leave the church. We’re encouraging a mindset in our young people that they can go to God with anything. When the Lord called me to ministry, there were others who helped pay the bills. My mission is to go out and build the confidence of individuals of any age, in any way we can, through Christ.” 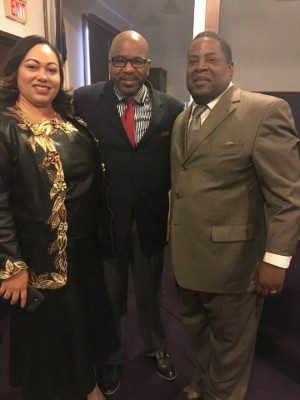 One of the church’s prayer emphases has to do with their current space, which is a rental. They’re looking to the future and what God will provide, for now they’re busting at the seams each week. They also envision a facility where “young people can come and enjoy recreational activities and build healthy relationships with others their age.” In this way, they’re not only offering a place of healing to the hurting, but hope to the hopeless before the real hurt sets in.

Any success they’ve seen so far is due to the grace of God alone. Some of the grace has been manifested in personal mentors to Esau Greene. “I stand on the shoulders of so many in the Church of God, from Wallace Hazard to Gideon Thompson to Timothy Clark to Horace Sheppard Jr. and Handel Smith.” It’s hard to get too proud when you remember where you came from and who helped you get there.

Some may wonder about the church’s name. Acts 11 records that the disciples of Christ were first called Christians in Antioch. Paul’s missionary journeys began there. And Esau Greene recognized that amid persecution, the church flourished. While persecution may look different in New Haven than it did for Antioch of old, Pastor Esau sees the spiritual warfare all around him, binding people in chains and keeping them from seeing a way out. But Jesus is the Way, and New Antioch Church of God is demonstrating this truth. “We’re determined not to be your conventional religious institution,” Pastor Esau explains, “but to really go into the highways and hedges and compel men, women, boys, and girls into the kingdom of God. We want to help struggling families and kids get off the street. I was a drug addict, but I was delivered. Our message is God can do the same for you.” 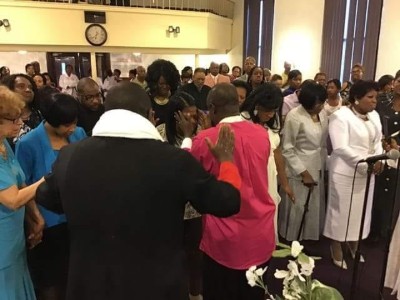 Capacity crowds are the norm at New Antioch Church of God.

Esau Greene encourages anyone who feels led by the Spirit to contribute to their urban ministry, especially as they seek a facility large enough to handle their growing congregation. Contact us at CHOGnews@chog.org and we’ll put you in touch with Pastor Esau Greene.

In Connecticut, across North America, and around the world, the Church of God is taking back what hell has stolen. Learn more about Church of God urban ministries and the role it plays in this divine call at www.jesusisthesubject.org/urban-missions.