Posted on October 24, 2018 by chogministries | Comments Off on Renewed into the New Year: NIYC Gives Believers Wintertime Boost 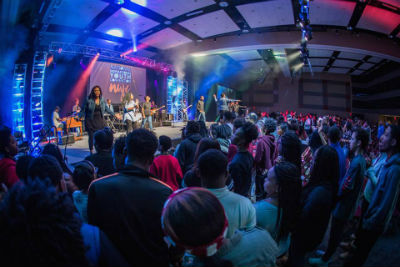 In the Church of God, the summer months are known for conventions and camp meetings. A variety of retreats and conferences often take place in the spring and the fall. But as the chill of winter sets in across much of the country, few spiritual retreats and getaways are available. In the wake of the commonly exhausting Christmas season, in view of the blues caused by all the grays outside, and in response to cabin fever, perhaps winter is when retreat is most vital! Thankfully, the Church of God has an answer—the National Inspirational Youth Convention (NIYC). Between Christmas and the end of the year, believers spanning generations and racial lines come together for an annual experience of worship, community, and renewal as the New Year dawns.

Kevin Earley, senior pastor of Metropolitan Church of God in Detroit, Michigan, is the president of NIYC. He says, “The NIYC has had a substantial impact on my personal and spiritual journey with the Lord.” That’s the reason he took on the leadership role. “I cherished the opportunity to give back and serve the students of this generation.”

One of Kevin’s earliest memories of the NIYC takes him back to his first year there as a student in 1994, when Dr. Richard Prim was serving as president. Alongside friend Jeff Whye, the two were quite a humorous pair. Dr. Prim recognized the talent and encouraged them to perform a comedy routine during one of the evening services. The move turned out to be a bit daring for Dr. Prim, who acknowledged that he’d later received “epistles” expressing disapproval. Kevin recalls that the moment “proved to be a pivotal point” his national ministry. “What began as a comedic expression,” he recounts, “morphed and now continues as a very serious ministry some twenty-four years later.” Jeff and Kevin are also now both in full-time ministry (and both served as featured speakers in the 2018 Regional Conventions of the Church of God!).

Like many Christian teenagers, an event like the NIYC offered Kevin the chance to experience worshiping the Lord in a setting full of other like-minded believers. “It was great to retreat to an environment where loving Jesus was cool,” Kevin reflects. Life-changing moments such as these embolden students to return to their hometowns, schools, and places of employment, ready to face the world and ready to love their neighbors, knowing that they are not alone.

From New Orleans to Los Angeles, from Dallas to Baltimore, the NIYC has taken place all over the map. That’s a bonus feature for Kevin, who compares attending the NIYC to a vacation—with eternity-altering effects, of course! “I do not come from an affluent family, and rarely took family vacations, but traveling to the NIYC enabled me to see the country,” Kevin reflects. “To this day, there are places I have only been because of the NIYC. With this in mind, during my tenure as president, I have intentionally held the convention in places it has never convened in its seventy-eight-year history. There were delegates who had not been to Covington, Kentucky, or to Little Rock, Arkansas, until I held the convention in these locations.” 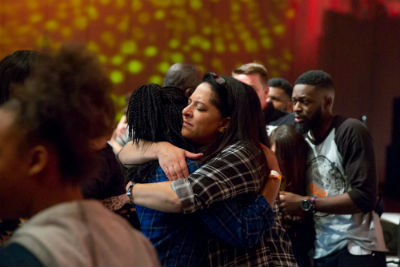 Lives are changed every year at the NIYC.

Unlike the International Youth Convention, the National Inspirational Youth Convention has, from the beginning, welcomed and encouraged whole families to attend. Sure, the word youth is in the event’s name, but a glance across the seats at any given gathering reveal a multigenerational, multiracial demographic. Programming specifically designed for adults, young adults, children, and youth leaders are featured in addition to that which is intended for students. KidsQuest, for example, is described as a “mini-convention,” consisting of full programming for children, ages three through eleven.

The NIYC really is for everyone, and those who attend each year are witnesses to this truth. Perhaps that’s because everyone, not just youth, need a wintertime boost for their souls. As Diana Swoope, chair of the General Assembly, wrote in a historical account of the NIYC in 1990, “Since 1938, the NIYC has been held between Christmas and New Year’s Eve with the express purpose to see young people come into the new year “on fire for God.”

Plan ahead for your wintertime boost! NIYC 2018 is scheduled for December 27–30 in Virginia, Beach, Virginia. Visit www.niyc.org for a list of speakers and other special guests. Register at www.niyc.org by November 30 before rates increase!

Follow the NIYC on Facebook and Instagram (@theniyc) to be one of the first to hear an upcoming announcement of a special guest worship artist, who has had many songs on the Gospel Music Billboard Top Three this year alone.