Posted on July 24, 2017 by chogministries | Comments Off on The Faster Pastor: Michigan Minister Competes for Charity 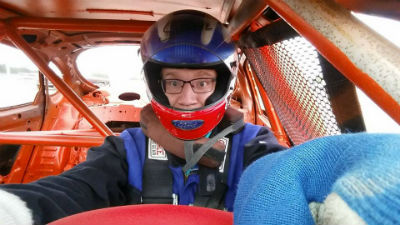 “…As the pastor behind me started to pass me on the inside, I gave the car more gas and tried to speed through the turn while staying high on the track. Turns three and four went well, but I had too much speed coming through turn one. I slipped up and over the edge of the track in turn two, down a short hill, and ran into the retaining wall on the other side—all in the span of two or three seconds.” No, this wasn’t the Brickyard 400, and the setting was neither Talladega nor Daytona. The competition was fierce, but not against each other; these pastors were racing for a charity of their choice. Though Pastor David Aukerman of Mt. Haley Church of God in Midland, Michigan, wasn’t ultimately named on the six-foot-tall cross-adorned traveling trophy, he did raise nearly $2,500 for the local homeless shelter.

A couple from church informed their pastor about the Faster Pastor Race more than a year ago. David had no need for speed, nor an interest in racing. He was hesitant and skeptical about the opportunity but, in the interest of being a team player, he decided to submit the application. After all, it was a chance to raise money for a good cause. Little did he know his time on the track in 2016 wouldn’t be his last.

“On the Sunday following the race,” David explains, “I told the Mt. Haley congregation that my learning experience is much like the lesson of Goldilocks and the Three Bears. Last year, I drove too low on the track and finished last. This year, I drove too high on the track and crashed out of the race. Somewhere in the middle should be just right!” Lord willing, next year will be “just right!”

But the competition paled in comparison to the fundraising efforts. The Mt. Haley congregation rallied around their pastor, along with friends and family from across the country, to make donations online ahead of the race. The higher the total, the higher the starting position for the pastor. In 2016, David’s race brought in $1,300. This year, the goal was $2,000, and they surpassed it by nearly $500! Sure, the race itself didn’t turn out like the Michigan minister had hoped, but David couldn’t be happier with the generosity his congregation.

“I hope our congregation takes away a sense of accomplishment from this, that we—even though we are a small congregation of about fifty people—can raise a significant amount of money to support a Christ-centered ministry in our community. Even a small church can make a difference in the lives of people who are suffering, for the sake of the kingdom of God.”

The Faster Pastor Race isn’t the only way Mt. Haley Church of God supports the homeless shelter known as Open Door. Each month, the church is responsible for one of the chapel services. Mt. Haley has also been known to host a summertime cookout at Open Door. “We provide all the food and use the grill on site to fix hamburgers and hot dogs with plenty of side dishes,” David explains, “and then we sit down at the table with the residents to share a meal together in Christian fellowship.” Supporting the ministry of Open Door is one way Mt. Haley carries out the Jesus’ instructions in Matthew 25 to serve “the least of these.”

Photo: The car David drives for the Faster Pastor Race.

Back at the Tri-City Motor Speedway, the unity of these pastors make a beautiful statement about the God they all serve. “On the day of the race, one of the pastors called us all together before we started racing, so we could pray together for safety and positive attitudes,” David recalls. “I think we all recognized two things: we were doing this primarily to raise money for charities, and each of us just wanted to avoid embarrassing ourselves on the track. As we talked together, it didn’t seem to matter to anyone about their denominational background…We shared a sense of unity because we are all pastors serving the same Lord, and we were all in a rather ridiculous situation together!”

David walked away from the accident with only a headache, but the Michigan pastor is ready for more. He’s got his sights set on qualifying for the final round next year, and perhaps $3,000 for Open Door.

In Midland, Michigan, across the United States, and around the world, God is on the move in the Church of God. Join the movement. Reach our world. Donate today at http://www.jesusisthesubject.org/give.