A Bountiful Harvest: Church of God in Guyana Celebrates Centennial

Posted on September 3, 2015 by chogministries | Comments Off on A Bountiful Harvest: Church of God in Guyana Celebrates Centennial 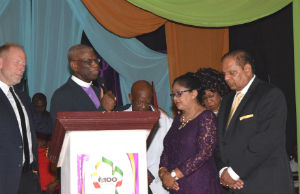 Not many people may be familiar with the small South American country Guyana, home to fewer than a million people, sitting on the North Atlantic coastline, but God is working in powerful ways there. This rainforest-covered “land of many waters” has been through many ups and downs as a country, but it now looks forward to a bright future—especially the church. Recently, the Church of God in Guyana celebrated their centennial, as well as a recent partnership with Children of Promise. God tends to work big miracles through mustard seeds of faith, and the same can be said of the church in Guyana.

The recent week-long celebration and evangelistic meetings took place this year because a seed was planted in 1915. A man from Guyana met with an American missionary in the Caribbean, and was impressed by the gospel preaching he heard. This man returned to Guyana, fueled by the Spirit, and began to start church meetings in his own home. Soon, word spread, and the meetings were moved into the streets. As thousands of people were saved, churches were built, and thus began the movement that has lasted a hundred years.

Influential leaders in the Church of God, such as Jim Lyon (general director of Church of God Ministries), Milton Grannum (a prominent Philadelphia pastor who grew up in Guyana), and Paul Maxfield (executive director of Children of Promise) had the pleasure of attending this joyous occasion. Numerous members of the church and other citizens of Guyana all congregated to the capital, Georgetown, to join in the festivities. Some even rode boats for eight to twelve hours down rivers to attend! 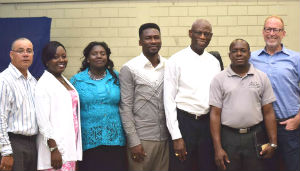 According to Jim Lyon, there is a “terrific generation of young leaders” ready to
spread the word of God across Guyana, many of whom attended ministry classes led by Milton Grannum. Milton went into further detail to explain how the church has grown in three specific ways and led to this explosion of young leaders. The first is that the church has been focused on “teaching and training under the assumption that every member is called to evangelism.” This starts with plenty of fasting and the sharing of testimonies. The second is that there has been plenty of “aggressive church planting.” The model for ministry that Guyana follows starts with serving the children through Vacation Bible School, then setting up Sunday schools for the children to take their parents. This spreading of the gospel leads to an established congregation for more families to come and learn about Christ.

The third way is by far the most complex, but also has such an impact on the community. Milton calls it “SHEEF,” which stands for Spiritual development, Health, Economic development, Education and Family life. Spirituality comes first, but now the church is also partnering with the government to serve the community in other ways. The church is also focusing on health education, job training, and encouraging college education to not just the members of the church, but also individuals in the community. SHEEF looks for ways that the “church and country can benefit.”

In many ways, the story of the Church of God in Guyana is similar to the story of the feeding of the five thousand. Out of the whole crowd of people, Jesus used a small boy and his lunch to work a miracle to nourish everyone. By placing the gospel in the smallest of hands, the children of Guyana are growing up to be strong men and women of Christ, and taking the gospel across the country. Even the prime minister of Guyana, Moses Nagamootoo, affirmed at the centennial celebration that he “was introduced to the gospel at the age of eleven at a church meeting.” The additional partnership with Children of Promise is another outreach with the potential of exploding. Surely, the Church of God in Guyana has another miraculous one hundred years of ministry ahead of them!

Emily Ploetz is a communication intern for Church of God Ministries from Cincinnati, Ohio. She is currently studying English education at Anderson University. Learn more about the Church of God at www.JesusIsTheSubject.org.