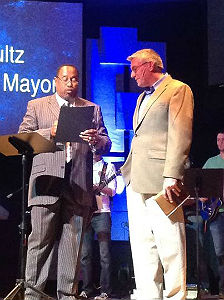 “We need to give away more money this year than we ever have before.” That declaration, by one of the elders of HighPoint Church of God in Lake Wales, Florida, came in the late summer of 2013. It was the beginning of a year of extraordinary local impact.

The church leaders were struggling to assemble a budget for the coming year and find the dollars that were needed. The biggest ticket item was the mortgage on a new building they constructed in 2008. Often during these difficult budget meetings, the statement had been made, “Just think what God could do with that $144,000 we spend annually on the mortgage.”

Finally, this elder replied, “We keep saying that like it is impossible! We preach all the time about a God who can do more than we ever ask or imagine. Let’s ask him to help us raise $144,000 in one campaign this fall so we can give it all away. What if we did that? Wouldn’t that be awesome?”

It is an amazing thing when a church begins to ask “What if?” instead of “What now?”

After the nervous laughter subsided, the elders of HighPoint Church prayed and decided to believe God for this miracle. The pastoral staff designed a campaign and, in early October, issued this challenge to their church:

“We believe that God wants us to shock our city and our world by being radicallygenerous. We want to give away more money than we ever have before, and we are asking you to pray about how the Lord would have you give to help us raise $144,000 for missions in 2014.”The unique twist was that nearly half of that money would stay in their hometown to meet the unbudgeted needs of several of the schools and service agencies of the small city that was struggling financially. God began to do a miracle almost immediately. One man donated a Harley Davidson motorcycle for the church to sell. The next Sunday, the leaders of the church put that Harley on the stage and told the story of that sacrifice. The commitments and gifts started to pick up. People who had been saving for a new car gave what they had saved. Others put off cruises for one year in order to give. Then one evening a couple who had been saving up money to build their dream home debt-free called Pastor Jack Hilligoss and told him they felt like God had told them to give all they had saved as a dollar-for-dollar match to every actual donation that was made before Christmas.

When the first offering was collected on the Sunday prior to Thanksgiving, members of HPC gave $128,000 in cash and another $34,000 was pledged. HighPoint Church has used half of those dollars to support several missions overseas—especially in the nation of Honduras. They have also used these dollars in exciting ways locally. They paid to get three local firefighters certified to train in CPR. HighPoint Church also purchased the training equipment so that the fire department could train city employees, and possibly train teachers from local schools, saving the local school system thousands of dollars.

The police officers of the local department had been putting money from their own paychecks into a pool to be able to purchase monitors for a high-tech tracking system they could not put into operation. HighPoint Church was able to purchase the monitors. Dollars were given to start a library at a high-risk school, to get specialized training for faculty at another school, and to pay for clothes and supplies for the high school’s work with homeless students. These are only a few of the ways that this local church of God showed radical generosity to their city.

When the first donations were received, Pastor Jack Hilligoss invited several city leaders and school officials to a dinner in their honor and asked them to share about their greatest unfunded budget need. This is where the ideas for most of the local giving came from. The leaders so enjoyed the synergy and interaction that occurred that evening that they have agreed to meet like that together at HighPoint Church once a quarter for the next year. They call this time together: “The Meeting of the Minds.” It is a time for city leaders to gather informally and share needs and ideas about how to make the city a better place to live.

It all started with one question. One question led to radical generosity and gave God a chance to show off through his church in this little town.

Jack Hilligoss is the lead pastor of HighPoint Church of God in Lake Wales, Florida. The church also recently made the local news for its community service efforts.