Posted on March 23, 2012 by chogministries | Comments Off on Church of God Brings Disaster Relief to Tornado-Stricken Midwest 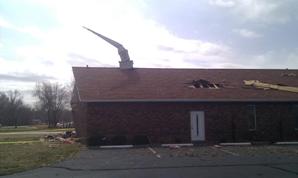 The tornado that struck southern Indiana left miles of destruction in its wake, killed more than a dozen residents, and nearly wiped some communities off the map. Henryville was one community that was especially hit hard, though the First Church of God building and the home of the pastor suffered only minor damage. Church of God congregations have already sent work teams and supplies in support of the relief effort. More work teams continue to pour in to help with the clearing away of debris and the rebuilding of homes. As of March 21, Church of God Ministries has received $9,585 for tornado disaster relief.

The volunteers are enthus 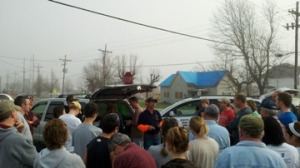 ed to report that they hope to break ground on the first house construction next week in Henryville. “Amazing effort by lots of Church of God people, as well as many other volunteers, are making this dream a reality,” explains Bob Morrison, director of the Three Nails Project and missions pastor at Monroe City First Church of God. Church of God Ministries and Indiana Ministries have been working closely with the Three Nails Project since the tornado. Morrison is grateful for the outpouring of support. “Thanks for all the prayers and support from the state and national office. As of Monday, March 19, the recovery effort will be completely led by faith-based organizations.”

Morrison shares a story of how the relief effort is changing lives:

David Sumpter (Henryville resident), who lost everything, lives off the land and was uninsured; also he is a military veteran. When I sat with him and ate breakfast, I said “David, if we could wave a magic wand and do something for you, what would be most important? He didn’t hesitate.

He said, “Rebuild the greenhouse.” He went on to explain that he grows all of his own produce, raises chickens, milks goats, and gives all the extras to over sixty residents of Henryville. He said, “It took me eighteen years to slowly build the greenhouse, $100 here and there. If I don’t get my garden started, lots of people won’t have produce this year.”

David came to the staging area a few days later and he was teary-eyed. He said, “When the storm took everything, I wished that it took me too. I didn’t want to go on. Then he smiled and said, “You all have given me a reason to keep going; you restored my faith.” So this week, we are clearing the house building site and preparing to break ground on Monday. We had a donation for David to buy him new chickens. So a crew is building his chicken house, too. 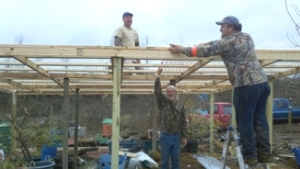 More stories of hope amid tragedy are beginning to emerge. John Neace, pastor of First Church of God in Carrier Mills, Illinois, reported that their building was directly hit by a tornado. His hope has remained constant through the disaster. “We plan to walk through this time holding to God’s unchanging hand,” he explains. They have set up a temporary meeting place in the parsonage.

Will you consider supporting tornado disaster relief and bring hope to the victims of these storms? You may contribute online by clicking here. Or send a check to Church of God Ministries, Attention: Tornado Relief, PO Box 2420, Anderson, Indiana 46012. Write Project 45.04509 in the memo line to assign your gift accordingly.

For questions regarding this and other disaster relief efforts in the United States and abroad, contact Don Smith, Disaster Relief Committee chair, 800-848-2464, ext. 3047.

In crises where an immediate response is critical for relief, Church of God Ministries advances funds in anticipation of a gracious outpouring of donations from churches and individuals. Such advances are made from a limited Disaster Relief Fund maintained by Church of God Ministries for emergency response to disaster. 100% of Disaster Relief contributions are utilized to bring relief to those affected by disasters worldwide. 10% of donations are held in reserve to ensure adequate response to future disasters. CGM’s reserve fund is capped at $100,000.

Contributions to Church of God Ministries are under CGM’s full discretion and control as required by IRS regulations. Funds distributed, as allowed by the IRS, will be used in compliance with donor intent.

This entry was posted in All Church of God, Disaster Relief and tagged Disaster Relief, Henryville, Illinois, Indiana, tornado. Bookmark the permalink.